I first got a night vision optic several years ago. I played around with it, even took it out to the desert and shot with it once. It was readily apparent that if I wanted this to be more than an interesting toy I’d need some professional instruction on how to use night vision effectively. Ever since I’ve been asking (ok, badgering) instructors I know who have experience with NVG to teach a night vision focused class, to no avail. And I can understand why. Teaching a class where the price of entry is a piece of $3000 hardware is a tough sell.

I have spotted a few other folks teaching classes like this, but they’ve always seemed to be on dates where I had a conflict, or I don’t find out about the class until it was too late. Earlier this year, however, I found a Night Vision Operator class being taught by Eric Dorenbush of Green Eyes Tactical down in the Dallas area and I jumped on it. Eric is a former Delta operator and he’s got plenty of experience operating under night vision gear.

Usually when I talk about gear for gun classes, I start out with my primary firearm, but in this case, it’s the NV optic that’s more important. Mine is a PVS-14 monocular made by ITT (who make a very similar model of the military). It’s a third generation night vision optic, so it performs well in situations with very little light (not quite as well as you see in video games, but pretty good).

One thing my brief experience playing around with this optic made clear to me is that you really need a night vision optic mounted to your head, rather than your rifle. With the NVG on your rifle, your situational awareness goes completely to hell.

The standard solution to this is to mount your NVG to a helmet, either a ballistic helmet (one that provides protection against small arms fire and fragments) or a bump helmet. The other standard solution is a head harness colloquially known as a “skull squeezer”. They’re every bit as uncomfortable as that name implies. I started out with a bump helmet, and while it worked well enough, it was bulky and hard to pack.

In Eric Pfleger’s Pathfinder, Reece and Mantracking course I saw one of the other students using a Crye Nightcap. This is essentially a thin, mesh cap with webbing threaded through it and a chin strap. It mounts the night vision optic, yet it’s small enough to roll up and fit in a pocket. I picked one up and, after playing with it a bit, it’s completely displaced my bump helmet as my standard way of mounting my NVG.

The next piece of the mounting solution is the mount itself. This attaches to a shroud on your helmet (or Nightcap in my case) and holds the NVG out in front of your face. It also allows you to pivot the NVG out of the way when you’re not using it. I started out with the rhino arm mount that was standard in the military at the time (so called because when it’s flipped up without an NVG on it, it looks like a rhino horn). Frankly, I didn’t find it very good, so I replaced it with the Norotos INVG Mount. I chose this mount for a specific reason: I’m 6’5”, a standard interior door is 6’8”, so if I flip NVG up on a standard mount it would be very easy for me to scrape them off on a doorframe. In addition to being able to be flipped up, the INVG mount also rotates on its axis (placing a night vision monocular like mine in front of the left side of my forehead). This allows me to get the NVG clear of my eyes while keeping it lower than the top of my head.

With the NVG mounted to your head, you need some way to aim your rifle. Some high speed units are using night vision compatible red dot sights and looking directly through the rifle optic using their night vision, but that’s not really an option with a magnified optic like the one on my rifle. The other, much more widely used solution is to mount an infrared laser (visible through night vision goggles but not the naked eye) on the rifle. You also want some sort of infrared light source for situations where there’s not enough ambient light for your NVG to function just based on the light in the environment. Sometimes these are separate devices, but often they’re integrated into a single Multi-Function Aiming Laser (MFAL).

My original solution was a Steiner OTAL IR laser and a Surefire M300V IR flashlight. This setup had a couple of disadvantages: First off, the OTAL only has an IR laser. This means when you want to zero it, you have to do it using night vision goggles because the IR laser is invisible to the naked eye. Second, can be difficult to coordinate the two different devices, especially if you want to run them off of momentary pressure switches rather than just locking them on (and giving your position away to anyone with an NVG. Finally, the relatively low power civilian version of the OTAL can be overwhelmed by the bright core of the Surefire’s IR light at close range, making it difficult to pick out your exact aiming point.

As long as my night vision gear was just something to play around with, these problems weren’t too serious, but when I signed up for this class, I decided to get something better. My original plan was to get one of the ATIPAL or DBAL IR laser/Illuminati’s devices (basically a civilian version of what the military uses). However, I saw some folks I know and trust who have lots of experience working under NVGs raving about the BE Meyers MAWL. I did some research, and I came away impressed by the MAWL’s design and the way it seemed like a well thought-out piece of hardware. It costs about twice what the other solutions do (almost as much as my PVS-14), but they assured me it really was worth it. I went ahead and got one.

It’s important to have a good white light on your rifle when running NVG, so that if the situation dictates you can switch rapidly to using visible light. I got a Surefire M600 Scout Light. In order to avoid too much shadowing from the suppressor, I wanted to mount it as far forward as possible. I ran across the Unity Tactical Monkey Bar, which replaces the small part on a Magpul MBUIS Pro front sight that clamps to the picatinny rail with one that has a mount for Surefire Scout lights. It cantilevers the scout light out forward of your rail system (the tailcap is about even with the sight).  The MAWL has buttons on the device itself for activating the laser/illuminator. With the MAWL mounted just behind the front sight these buttons work well when standing, but in some of the other shooting positions I found them difficult to reach, even with my long arms. The solution is a remote pressure switch to activate the MAWL. Similarly, with the Surefire M600 mounted as far forward as I had it, it was difficult to reach the tailcap switch in anything but a standing position. 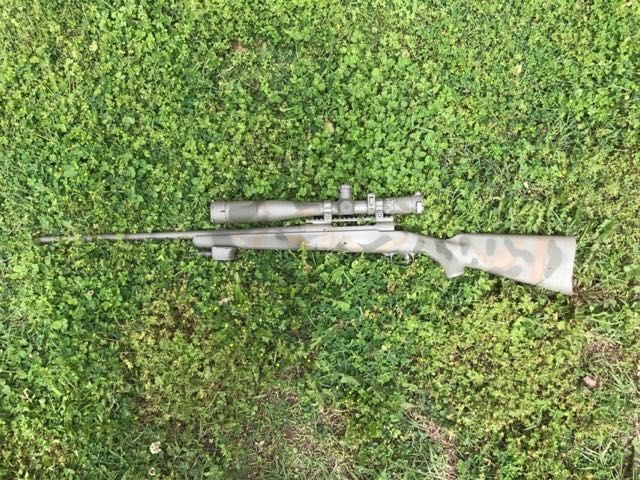