Recently I took a Shooting in Low Light class at Range 54, a local indoor range and training facility here in Wichita. This is a single-evening course that covers the basics of shooting in low light situations.

Trigger time in low light is not easy to get, so I try to hit as many low light courses as I can. In this case, my specific motivation for taking this class was to test some new hardware.

I’ve been setting up a variation on the “Roland Special”: a Glock 19 with a compensator, red dot, and weaponlight. The low light applications of a weaponlight are pretty obvious, but the other hardware reason for taking this class was to see what effect the comp had on muzzle flash.

My Roland Special is a Glock 19X with an RMR, a Mayhem Syndicate Compensator, and the Crimson Trace Lightguard LTG-736. The Lightguard is a bit of a compromise. It’s very compact and has a frame mounted pressure switch allowing momentary one-handed activation. However, it doesn’t have the lumens of some of the larger weaponlights, is not easily removable, and it takes CR2 batteries rather than the more common CR123s.

I went with the Mayhem Syndicate comp because it’s nice and compact. On a G19, it’s the same length as a G17 slide (as compared to most comps that take a G19 up to G34 length).

One unexpected addition to my gear for this class was the Surefire Stiletto. A fellow student at the Longrifle/Scout Sniper class last week showed me his, and I immediately ordered one off of Amazon. The Stiletto is a is a 650 lumen light that uses a built-in rechargeable battery rather than replaceable batteries. Rather than being cylindrical, it’s sort of flattened, making it easy to carry in a pocket. What really got me interested is the switch setup. It has a tail switch and a switch on the side of the light. All the tail switch does is momentarily activate the 650-lumen setting. No locking the light on, no cycling through different modes (you can get a strobe mode by triple tapping and holding, but I basically ignore that). The side button will turn on the light in the 5-lumen task light power (it will cycle through the power settings if you click it multiple times). This is the first light with multiple power settings that I really like the switchology on. The clear separation between “tactical” and “task” lighting is a great setup.

The class was scheduled from 6-8pm and kicked off a little after 6. Greg, the instructor, introduced himself, then had the students talk a bit about their backgrounds.

The first section of the class was dedicated to lecture, starting with the four rules of gun safety. With that taken care of, Greg segued into low light tactics.

The lecture was done in Range 54’s very nice classroom facility, rather than on the range. This meant that it could be accompanied by a powerpoint. Unfortunately, I think this ended up detracting from the quality of the lecture. It wasn’t very interactive. It also meant that all of the lecture content was done up front (in about the first 40 minutes of the class) before we got out of the range and shot. The lecture was quite the info dump; I think it would have benefited from being broken up into shorter chunks and having some of the more technique focused stuff integrated into the range portion of the class.

Greg covered some of the fundamental principles of shooting in low light, then moved on to the various light techniques. He covered Harries, FBI, Rogers, and neck index techniques. Harries has you holding the light in one hand, gun in the other, with the back of the hands pressed together. Rogers allows you to get somewhat of a support hand grip on your pistol, trapping the light between your index and middle fingers and pulling it to the rear to activate it. The FBI technique is the classic police light technique, with the light held above and to the support side. Neck index involves holding the light against your jaw, linking it to your head position rather than your gun hand.

Greg kind of poo-poohed the neck index, which I find to be one of the most useful flashlight techniques (and didn’t cover reverse Harries at all, which I also like quite a bit).

He talked very briefly about point shooting, in the context of pointing in using body mechanics and using your muzzle flash to verify sight alignment for subsequent shots.

Finally, he moved on to a more general discussion of defensive shooting, talking about verbal commands, using cover, and post-fight actions to check for additional threats, injuries, and dealing with responding law enforcement. A particularly good point that he made was that in low light you may want to get much closer to your cover than you would during daylight. When you’re using a light, getting closer to cover avoids bouncing light off your cover and illuminating yourself and ruining your vision.

He talked a bit about reloads, both out of battery and in battery (slide lock and proactive reloads). One thing he emphasized was stowing the light before reloading, rather than trying to reload with the flashlight in hand.

We moved out to the range and got started with some dry work, practicing each of the shooting positions. Greg pointed out that with the relatively low ceiling on the range using the FBI technique with your gun up high tended to reflect quite a bit of light back on you. Given that most of my low light shooting experience has been on outdoor ranges, this isn’t something I’ve encountered before.

Getting started with the live fire, we began with pairs from low ready using the Harries, Rogers, and FBI positions. I had a real hard time using the Rogers position with the Stiletto. The tail switch just isn’t well set up for that sort of activation. Harries and FBI were no problem, however.

While I tried to follow Greg’s instructions to stow the light during reloads, most of the time I ended up leaving it in my hand because that’s how I’ve practiced. Due to its flat shape, the Stiletto actually quite good in the hand when reloading. It’s much easier to accommodate alongside a magazine than a cylindrical flashlight.

We did a bit of shooting without the light, just using the muzzle flash. For these drills, I brought out a bit of my carry ammo to see how much muzzle flash it generated with the comp. It was fairly minimal. Definitely more prominent than a gun without a comp, but hardly blinding. My practice ammo was definitely a lot more flashy, though.

Moving back to 7 yards, Greg had us start giving some verbal commands (“Stop!”, “Drop the weapon!”, etc.) during the drills as well. Around this point, he stopped prescribing which flashlight technique to use on each drill and told us to choose what we were most comfortable with (including using a weaponlight if we had one). I had some difficulty reliably activating the Lightguard using the pressure switch, particularly while actually shooting. I definitely need to put in some more practice with it.

Greg dragged some stacked barrels out to the 15-yard line for us to use as cover and had us practice shooting around to either side of them. When he was demoing shooting from the support side, he swapped hands. I’m always up for swapping hands, so when I shot the drill, I did likewise. Since there wasn’t any actual instruction on support side shooting, I couldn’t help but wonder how educated some of my fellow students’ left-hand trigger fingers were. We practiced both standing and kneeling, from both the right and left sides of the barricade.

We finished up right at about 8 o’clock. Greg had us to a bit of a debrief afterward, asking us for something we liked about the class and something we didn’t like.

This was a worthwhile class for me. The content was pretty basic, but in a 2-hour open enrollment class I wasn’t expecting anything like one of Roger Phillips’ 4-night extravaganzas. It did a good job covering the fundamentals.

The class definitely taught me some valuable things about my gear. The Stiletto worked quite well. Not really suitable for the Rogers technique, but anything that has your thumb on the tail switch works just fine. The flat shape is great for keeping it in the hand during weapon manipulations. It’s also got a ton of lumens. I’m really liking this light.

The Lightguard, on the other hand, does not have a ton of lumens. However, it definitely has enough for target identification at close ranges. I don’t know that I’d want to search a darkened warehouse or a big field with it, but for home defense or a close range confrontation in an alleyway or Walmart parking lot, it has enough to acquire and identify your target. However, I definitely need to put some more time into training with it. I sometimes had a hard time keeping the light on as I was shooting. Sometimes I found the light turning off as I moved my finger to the trigger. More dry practice is definitely necessary.

The muzzle flash from the Mayhem Syndicate comp was never blinding, even with my flashy practice ammo. With the carry ammo, it was downright tame. Definitely not the problem that some folks make it out to be.

One piece of gear I had some trouble with was my magazines. When I switched to appendix carry, I also switched from standard length G17 mags to the longer Magpul 21 round mags. For this class, I only brought standard length mags, and I found them difficult to dig out of my appendix mag pouch. Lesson learned, bring some 21 rounders next time. 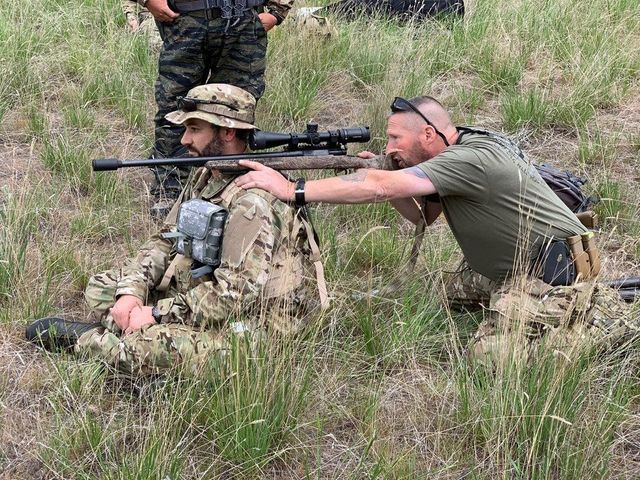 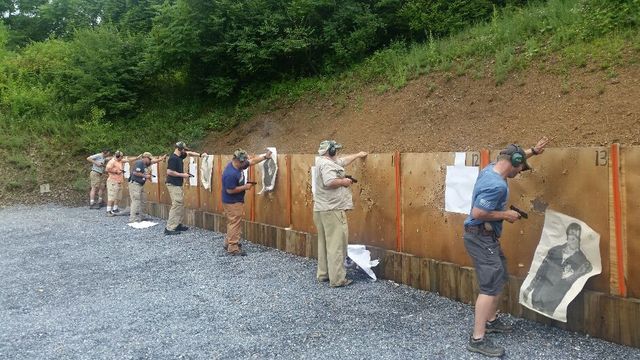