Last Sunday I attended APA Training Group’s Advanced Carbine 1 course, taught by David Bonn. I ran across the APA website a couple of years ago when I was looking at local training options here in Kansas, but I hadn’t had the occasion to take one of their classes until now.

One caveat I need to put in up front is that Dave is definitely one of those instructors who isn’t afraid to modify his curriculum to suit the skill level of a particular class. Hence the “(.5)” in the title above. So, no guarantees that this is exactly what you’ll get if you take the Advanced Carbine 1 course, but if everyone shows up with the requisite skillset, he’s definitely willing to push things a bit.

My main motive for taking this course was to test a new AR that I built. This is a 14.5” gun with a fixed muzzle device. It’s built on an Aero Precision upper and lower receiver with a LaRue barrel, Magpul UBR Gen 2 stock, and a Lancer handguard. This is the first rifle I’ve built with a VLTOR A5 buffer so we’ll see how that works. I’ve got my usual AAC Mini4 suppressor on the front end and I rounded the rifle out with a VTAC sling and a batch of new Gen 3 PMAGs (in FDE to match the paint job on the rifle).

The biggest change for me is the optic. I’m using my Leupold Mark 6 1-6x, which I pulled off my DMR. This will be the first fighting rifle class that I’ve taken with a magnified optic. In every other combat rifle class I’ve taken I used either a red dot or (rarely) iron sights. My experience with magnified optics has been limited to precision rifle courses.

One of the reasons I’m trying out a low power variable is that I’ve got some significant astigmatism in both eyes dots appear blurry and starburst shaped to me. This isn’t really a problem at across the room distances, but it does come into play shooting at longer ranges. In 2016 I took a couple of rifle courses involving some shooting at 100 and 200 yards and I definitely ran up against the limits of my ability to shoot accurately with a red dot. The etched reticles on a magnified optic don’t suffer from these issues (not to mention the benefits of the magnification itself at longer ranges).

The flip side of magnified optics, even at 1x, is that they require a more precise and consistent cheekweld than a red dot. Since most of my fighting rifle experience has been on red dots I’m cognizant of the fact that my cheekweld may be a bit sloppy. Starting about a month before the class I did daily dry practice mounting the rifle and acquiring the illuminated reticle in the magnified optic.

Between the weight of the optic, the moderately heavy profile of the LaRue barrel, and the hefty UBR stock this was the heaviest rifle that I’ve ever brought to a class, over 11 pounds. The dry practice helped me get used to that as well.

Not knowing what the “culture” (for the lack of a better term) of the APA classes was when it comes to support gear, I decided to run the class off of mag pouches on the belt. Since I only had one AR mag pouch that would fit this belt, I picked up a couple of Bladetech kydex mag pouches before the class. I paired these with one of my EDC pistol mag pouches, an EMDOM dump pouch, and an 1110 tourniquet pouch. For a handgun I brought my red dot equipped Glock 17, in an Archangel holster. Last (and probably least) I wore the fancy Overlord tactical gloves that I recently bought on a friend’s recommendation.

All of the other students in the class were running ARs of one description or another. They all had red dot sights (either EoTechs or full size Aimpoints). Many of them were also running flip to the side magnifiers (mostly Vortex). Handguns were a more varied lot, with Glocks, XDs, and M&Ps, and maybe some others that I didn’t notice. All of them were polymer frame striker fired guns. Most students had war belts, though there was also one chest rig in evidence (and one fellow just running the class out of his pants pockets).

Rather than meeting at the range Dave has the students meet up at a local restaurant for breakfast, then convoy over to the private range where the class takes place.

I toted my stuff over to the benches and started getting geared up when I ran into my first issue of the day. I found the the new Gen 3 PMAGs I was using didn’t want to fit into the older kydex mag pouch that I’d brought. I initially thought the problem was the over-travel insertion stop on the PMAG, but examining it after class I think the real issue is the horizontal ribs on the front corners of the mag. Thankfully, I had the two Bladetech pouches which were more squared off and took the PMAGs fine. Two mags on the belt turned out to be sufficient for everything we were asked to do in the class, but this experience ought to teach me to test new mags with the mag pouches I plan to use them with.

Once a couple of laggards arrived we had half a dozen students for the class. All of them except me had trained with Dave before.

Dave started off with the safety brief followed by a short medical brief. Since I had mentioned that I was zeroed at 50 yards (really more like 45) he took me out on the range to verify my zero (he also used this opportunity to check out my technique). My zero was fine and we moved up to 25 for the rest of the students to verify their own zeroes. I took the advantage of the opportunity to verify that dialing in 1 mil of elevation on the optic would put me dead on at 25. That way I can verify my zero at 25 in the future if necessary. 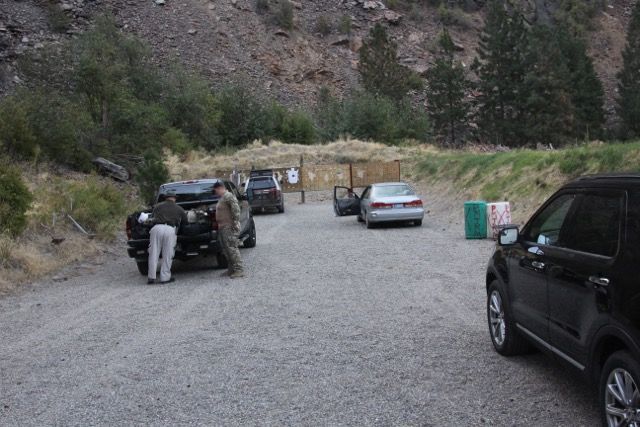