Traditionally, external ballistics has been a subject rife with myths and “voodo” in the shooting community. Often poorly understood, information gets passed on by word of mouth, like a game of telephone, or by brief explanations in a book or class, which cover the “what” but not the “why”, laying the groundwork for faulty understandings. In his book Applied Ballistics for Long Rang Shooting Bryan Litz is intent on putting shooters understanding of external ballistics on a solid, scientific basis.

Litz is well qualified for such a task. He is, literally, a rocket scientist (he worked for the Air Force on air-to-air missile design). He’s also an accomplished long range shooting competitor, giving him both a theoretical and practical understanding of ballistics. He has parlayed this twofold experience into a position as Chief Ballistician for Berger Bullets. Despite his deep background in the science of aerodynamics, Litz avoids excessive jargon and tailors his explanations for the understanding of a general shooting audience. He is by no means an inscrutable academic.

Applied Ballistics for Long Range Shooting can be divided into three sections. In the first, Litz lays down the fundamentals of external ballistics and goes through all the factors that affect the path bullet in flight. The second section contains examples applying these fundamentals in ways that go beyond just calculating a trajectory for a given round. The third section, comprising roughly half the book, includes ballistics data for more than 225 different bullets.

In the first section, Litz begins with an explanation of the ballistic coefficient (BC) and how it’s calculated and used, as well as an argument for using the G7 ballistic coefficient, rather than the more commonly used G1 version. This has a bearing on the third section of the book so I’m going to try to explain how the G7 BC differs and why it’s often a better choice than the G1 BC.

The ballistic coefficient is a measure of how well a bullet retains it’s velocity. A bullet with a high BC will penetrate the air better, and take longer to slow down than a bullet with a lower BC. The way a bullet interacts with the air at various speeds is a complicated subject, and rather than defining this from scratch, the ballistic coefficient describes a bullet’s interaction with the air by comparing it to a reference projectile. 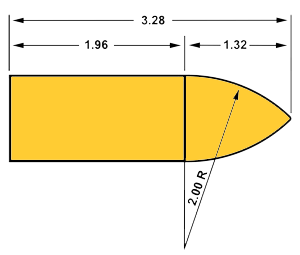 This doesn’t look much like a modern long-range rifle bullet. In fact, what it looks like is a WW I artillery shell. 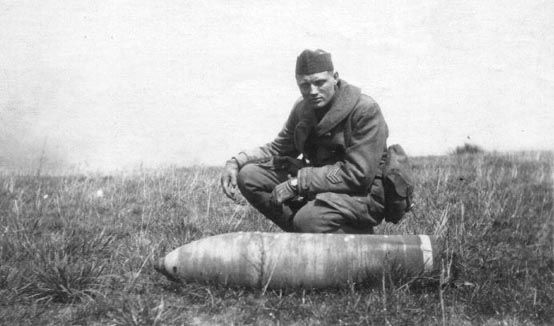 This shouldn’t be too surprising, given that the G1 projectile was first defined by German artillery firm Krupp in 1881.

When a bullet differs so radically from the reference projectile it’s impossible to produce a ballistic coefficient that works accurately across a wide range of bullet velocities. If a bullet is radically different from the reference projectile, any BC is only going to be good at a particular velocity. Since the velocity of a bullet starts decreasing the moment it leaves the muzzle, this is a big problem

One way to deal with this is using a banded BC; giving several different BC values, each of which apply to a different velocity. The problem is most folks don’t know how to use a banded BC effectively and many ballistics programs don’t have a built-in option for entering banded BC.

Compounding these difficulties, the mismatch between modern long range bullets and the G1 reference projectile also creates some perverse incentives for bullet manufacturers. Bullet makers compete on BC, they want to have the highest number possible. The highest G1 BCs come at the highest velocities, so bullet companies have an incentive to make their bullets look good by quoting the high-velocity BC right at the muzzle, rather than doing a banded BC, or a more realistic measurement. Combine this with different testing methodologies among different bullet manufacturers and it becomes difficult to truly compare the long range performance of different rounds using their BCs. 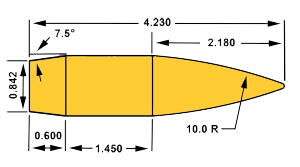 It looks a lot more like a modern long range bullet than the G1 projectile, and it produces much better results. A G7 BC can be used to produce accurate results over the entire spectrum of realistic rifle bullet speeds. Unfortunately, most bullet manufacturers don’t list G7 BCs for their bullets. This is where Applied Ballistics comes in. That third section I mentioned earlier? It includes G7 BCs for over 225 bullet designs from a variety of manufacturers. All measured using the same techniques, so they’re directly comparable between manufacturers. It’s this data that makes this book an invaluable reference for long range shooting.

While I’ve spent a bunch of time explaining the virtues of the G7 BC here, that’s just a quick summary of part of a single chapter. Litz goes on provides detailed, readable explanations of all the factors affecting a bullet’s flight. He covers the effects of gravity and shooting uphill or downhill. He has an excellent explanation of the mechanics of how wind affects a bullet in flight that really increased my understanding about how bullet and caliber choices affect wind drift.

Litz even gives good coverage to much smaller effects, like gyroscopic drift and the coriolis effect. These chapters are a good example of how he talks about different contexts and situations, explaining where different effects become significant. For instance, both long range competition shooting and long range hunting require a good grasp of external ballistics, but how that knowledge applies varies depending on the discipline.

Throughout this part of the book, one of the things Litz emphasizes is the difference between deterministic and non-deterministic effects. If we know the range (and have a drop table for our rifle/ammo based on an accurate BC) we can calculate the drop exactly. It proceeds entirely from the laws of physics and we can measure all of the factors involved. The same goes even for much smaller factors, like the coriolis effect. Wind, on the other hand, is non-deterministic. We can’t effectively measure the wind along every point of the bullet’s flight path (and even if we could, it might change by the time the bullet gets there). No matter what we do there is no way to measure the wind and dial in an exact correction.

The chapter on using your ballistics program covers the importance of giving the program good data to work with. It also covers using ballistics programs for purposes other than just generating a drop chart for a given round: things like analyzing remaining energy at different ranges and looking at how errors in wind speed or muzzle velocity affect the point of impact. He also describes an exercise he undertook to validate the output of the ballistics software included on CD with the book.

The rifle scope is really the link between all this ballistic data and where the bullet actually goes. Litz has a chapter on ensuring that the data from your ballistic solution is what actually gets put into practice downrange, including eliminating rifle cant, measuring the click adjustments on your rifle (and correcting for them if they’re off) as well as some material on iron sights.

The last two chapters in the first section deal with bullet stability and extended long range shooting. Both of these are actually quite closely linked. The former is mostly a discussion of gyroscopic stability while the latter is a discussion of dynamic stability. The combination of the two gives a good explanation of the factors that (hopefully) keep our bullets going pointy end first.

The second portion of the book takes the baseline ballistic knowledge laid down in the first section and applies it to a variety of problems. The first chapter examines trends and variations in BC within and across different calibers. It also the nature of bullet dispersion in flight, and explains why you can’t just scale up a 100 yard group as the distance increases.

The next four chapters examine the effects of BC on hit probabilities in both target shooting and hunting, and in how well bullets retain energy downrange (important if you’re trying to do more than just punch paper).

Finally, the prose section of the book is rounded out by a few chapters on bullet design, construction, and an explanation of the ballistic data that comprises the remainder of the book.

This bullet data, on over 225 different projectiles, is worth the cost of admission all on its own. This data has two particular features that make it an indispensable for the long range shooter. First, Litz provides the G7 ballistic coefficient for every bullet tested. As explained above, the G7 BC is a much better tool for calculating the trajectories of modern long-range bullets than the G1 (though the data lists G1 BC as well). Second, all of this ballistic data was calculated by the same person, using the same methods. This makes it much easier to compare different bullets (particularly bullets from different companies) without worrying about variation in testing protocols or marketing hype.

The book also comes with a CD containing Bryan Litz’s Point Mass Ballistics Solver software for Windows. I’ve never really used this, since I prefer my ballistics software on a phone or tablet, so I can have access to it both at home and in the field. However, Litz has come out with an iPhone version of the software (that, however, is a different review).

As you can probably guess by now, I’m a big fan of Applied Ballistics for Long Range Shooting. This really is the bible when it comes to external ballistics. I think it really has something to offer everyone, from the novice to the expert.

As an example of just how important I think this book is, after I moved from South Carolina a few years ago, I couldn’t locate my copy of the book. After searching high and low for it, I ended up ordering another copy. It was important enough that I was unwilling to do without it. It turns out it was just in a box I hadn’t unpacked, so now I have two copies. Recently, Litz announced that the book was now available as a Kindle e-book, prompting me to buy another copy, so I’d have something I could take into the field with me more easily. Bottom line, I think this book is so good, and so important to the long range shooter I have three copies of it. 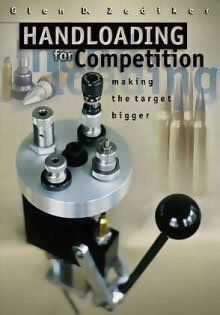 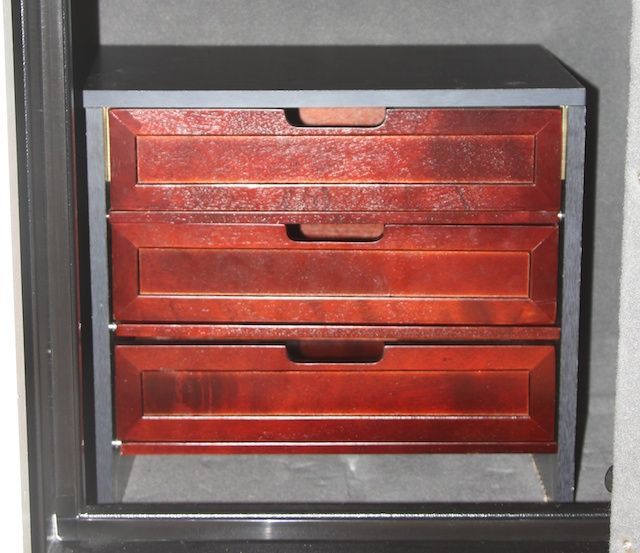