Las week I participated in Roger Phillips’ Extreme Night Fighter Week. Opportunities to train seriously in low light are few and far between. I’ve been lucky enough to have had a few in the past, but I’m eager to jump on any low light classes I have a chance to take. The class was set up over four consecutive nights, running from 5pm to midnight. The first two nights were dedicated to live fire, with the third dedicated to force on force and the last to CQB.

In addition to Roger, Dr. John Meade came for the first two nights and contributed his knowledge, both medical, and general gunfighting. As far as the students went there were quite a few old hands that I knew from previous classes, plus a few new faces. All were skilled shooters with plenty of previous training experience under their belts and they were well prepared for what we were doing.

A good point shooting skill set is absolutely mandatory for any sort of reactive gunfighting in low light. That said, not all point shooting skills are created equal in low light situations. I think this is a product of how much they rely on body mechanics/kinesthetics versus visual feedback. For instance, 3/4 hip relies a lot on body mechanics and provides less visual feedback. My shots from 3/4 hip in the dark were probably as accurate as they would have been in daylight. Center Axis Relock, on the other hand, relies much more on eye-hand coordination aiming down the edge of the slide than on body mechanics. My CAR shooting was much worse in the dark than it would have been in daylight. Point shoulder is an interesting case. Being up at eye level, it provides the opportunity for a lot of visual feedback, but because it relies on pointing the whole arm it has excellent kinesthetics as well. It holds up quite well in low light. Which is good, because the flashlight in the hand technique meant some variation of point shoulder was probably the most common shooting method during force on force.

There have been some discussion about the limitations of red dot pistols at night (particularly those without tritium BUIS). I ran a red dot Glock as my primary pistol and never really ran into any difficulty in this class, in part because almost all of the shooting in this class was easily within effective point shooting distance. I saw the dot some of the time, and when I did it was a nice confirmation that I was on target, but it wasn’t really necessary, nor did it pose any difficulty for my shooting.

Lighting up your opponent’s eyes with the flashlight then turning it off and moving is just hideously effective. The corollary to this is that the most important characteristic of a flashlight is the ability to turn it off instantly, and without any chance of screwing up this vital task. Flashlights need to be aimed. There is a big difference between centering the beam on someone’s chest and centering it on their eyes. 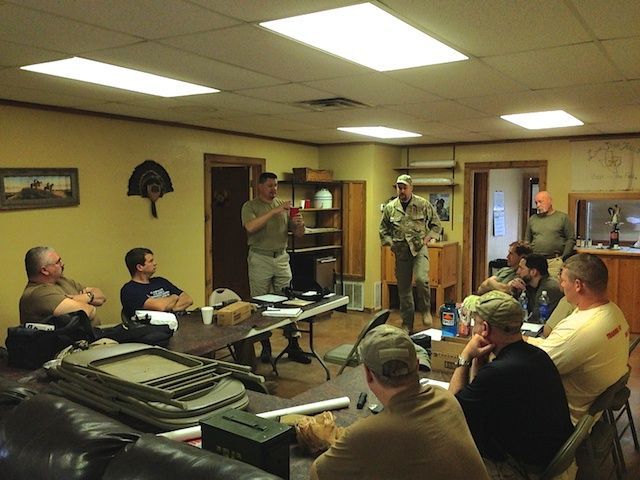