This weekend I had a chance to take the Essential Defensive Pistol Skills class at Range 54 in Wichita. This class is a bit of a change in format for them. The previous courses I’ve taken from them (Shooting in Low Light and Defensive Home Shotgun) have been short, two hour affairs. With Essential Defensive Pistol Skills, they’re experimenting with longer, four-hour classes. This was actually the first time they’ve taught this curriculum in the four huor format, so we got to be the guinea pigs.

One caveat to my experience is that I’m not exactly the target market for this course. The class is primarily intended as a next step for folks who have taken CCW permit and basic pistol marksmanship courses. I was interested in taking it both to get some trigger time and to run some rounds through my new Glock 45.

The Glock 45 is set up as a sort of Roland Special with an RMR, a Mayhem Syndicate comp, and Surefire XC1-B weaponlight. The gun has an Overwatch Precision trigger and a Kägwerks extended and raised slide release (I’ve previously had some trouble with the slide unintentionally locking back on Gen 5 Glocks, the Kägwerks slide release is intended to correct that). I ran it out of a Dale Fricke appendix holster. Since I’m not using the G45 as an EDC gun yet, I also brought my usual carry gun, an RMRed Glock 17.

There was a pretty wide variety of handguns in the class. All were 9mm semi-autos, though there was a mix of single and double stack guns. I was the only one running a red dot. Interestingly, almost half the class was running appendix carry (as was one of the instructors).

Unlike the previous classes I’ve taken at Range 54, there wasn’t a lot of classroom lecture time up front. The instructors, Derek and Gio, introduced themselves, then we got right out to the range.

We started by reviewing the draw. Derek briefly went over the fundamentals of marksmanship, emphasizing the differences between range marksmanship and combat shooting.

After some dry work from the holster, Derek talked about reloading from slide lock. At this point, we went live, working the draw and reload. We only fired one or two shots per drill. Derek mentioned that the course of fire was intended to keep the round count relatively modest, to keep the overall cost of the class down for students. By incorporating the draw and the reload into each repetition, we were definitely able to get a lot of mileage out of those 20 or so rounds.

Of course, if your gun runs dry in a gunfight, you probably don’t want to just stand there and reload. The best place to reload is behind cover or concealment. If you don’t have cover handy, you should at least move. On the next drill, we fired at one target, moved laterally while reloading, then fired at a second target. I appreciated that Derek set it up so we could move a substantial distance across the range, rather than just taking a step or two. This meant running it one student at a time, but the class was small enough that it didn’t take much time to get through everyone.

Thus far, we had not fired anything beyond a signgle round in succession. Along with some discussion on resetting the trigger we did some controlled pairs on a small 2″ square for accuracy, then moved on to five-round bursts. Derek had us shoot bursts at 10 yards, 7 yards, 5 yards, and 3 yards to get a feel for how your cadence of fire needs to change based on distance. For the 3 yard drill, he talked about “indexing” rather than using the sights. I was glad to see some acknowledgment of point shooting in a class like this, but I was a bit amused by his reluctance to call it that (he only uttered the words “point shooting” once).

Next up was some multiple target drills. We started by just firing at adjacent targets on the line, then moved on to shooting a pair of more widely separated targets and moving back to cover (represented by some barrels). Since taking Tu Lam’s class last fall, I’ve spent quite a bit of time doing target to target transitions in my dry fire practice. I could see the results of those efforts during these drills.

They had us keep our guns pointed downrange when moving back to cover, which was hard for me. Previous training would have made going to Sul much more natural, but I can see why they didn’t want to spend the time teaching that in a short class like this one.

Almost all of the shooting in this class was inside of 10 yards, but we did one drill involving a longer shot. Derek had us start at about 22 yards, fire one shot, run up to the 10-yard line and fire a pair, then run up to 7 yards and fire three. We ran this drill two students at a time. I was part of the first pair, and I managed to so outdistance the other student they started holding people at the 22-yard line until both students had fired that first shot. After running the drill a couple of times, we also did it backwards, starting at 7 yards and moving back to 10, and 22.

Having covered moving into position and stopping to shoot, we did a bit of shooting on the move. Starting at 15 yards, we moved up to the 10-yard line as we drew, fired while moving from 10 to 5, reloaded, then moved backwards from the 5 to the 10, firing as we backpedaled. This is another area where I’ve been putting some dry practice time. I did OK, but I think I still need some more work.

The last subject for the class was post-shooting activities. Derek talked through the sequence of events, including moving to cover, assessing whether additional shots were necessary, doing a medical self-check, and calling 911. No mention of a proactive reload, which surprised me a bit. For our final drill, he had us engage a target, then incorporate all these elements.

During the end-of-class debrief in addition to asking for student questions, Derek and Gio were especially interested in feedback on the course, since this was the first time for this material in the four-hour format. They also talked a bit about the follow-on class, Advanced Pistol Craft.

This was a good class. I liked it quite a bit more than the two-hour courses I’d taken at Range 54. It was fast-paced without feeling too rushed, and they crammed a lot of content into a four-hour block. I’m happy to spend a ton of time out on the range when I go to a class, but if the class ran any longer, they’d have to start throwing in more and longer breaks. I think four hours has about the highest content to class time ratio you can get with firearms training.

They incorporated a lot of movement for a relatively basic level class like this one. I like the fact that they included drills involving moving into shooting position. It’s something that doesn’t get incorporated into classes as often as shooting on the move.

I did run into one gear issue. About halfway through the class the RMR on my Glock 45 started going out intermittently. After a bit, I realized that it was slightly loose, which was probably causing the battery to lose contact with the electronics. I didn’t have a hex wrench with me to tighten it up, so I just switched to my carry gun instead. After I got home, I found the screws didn’t have any loctite on them. I hadn’t had this optic off since it came back from the gunsmith where I had the slide milled, so it must not have come with any (something worth checking when I get an RMR installed in the future).

Other than that, the gun ran fine. No issues with the slide locking back, so the new slide release is definitely helping. Given the RMR issue, I still want to run some more rounds through it before making it my EDC.

I don’t know if it was the ejection pattern of the gun the guy shooting next to me was using or the shirt I was wearing or what, but for some reason, I got more brass down my neck in this class than I have any other class (four times in four hours). Thankfully I was able to keep my gun pointed in a safe direction and finish the drill each time before doing the hot brass dance.

Up next Ronin Tactics 3-day: Carbine, Pistol, and Streetfighter Recently I had the chance to take three days of classes from Tu Lam of Ronin Tactics. We did a day of pistol on Friday, carbine on Saturday, and 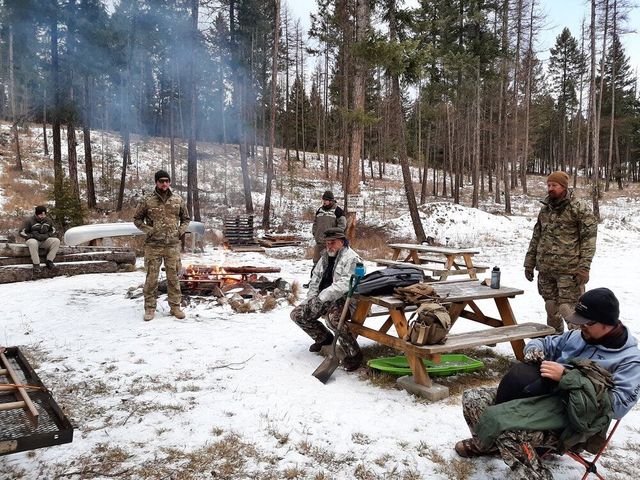