This is an article that I wrote about four years ago. I breifly mentioned my thoughts on trunk guns in a thread on Paragon Pride a few weeks ago and one of the guys there asked me to expand on it a bit. I considered writing a new article, but after rereading this one I realized that there isn’t really anything about it I’d change.

Many of us like to keep a trunk rifle (or truck rifle, depending on what you drive) in our vehicle. It’s nice to have access to a long gun, just in case. In case of what, though? Recently I’ve seen people discussing about scenarios for using their trunk gun that I just don’t think are very practical.

One of the more outlandish ones is the idea of a trunk rifle to disable a pursuing vehicle. When you’re behind the wheel of a car, you’re at the controls of a 2000+ pound projectile and a conveyance that can take you away from danger at high speeds. As long as your vehicle is mobile, there’s little reason to divert your attention to launching half ounce pieces of lead. The accelerator pedal is a better choice than going for a gun in most cases. However, there are times when you may need to use a firearm from your vehicle. If you are attacked while stuck in traffic, for example. In these cases you need a weapon immediately at hand and that is handy enough to easily maneuver inside the passenger compartment. This is the realm of the pistol, not the rifle.

Perhaps the most common vision for the trunk rifle is the idea that during an active shooter incident or terrorist attack you will rush out to your car and retrieve your rifle, then come back with guns blazing to take out the attackers. This is consistent with Clint Smith’s aphorism that, “The only purpose for a pistol is to fight your way back to the rifle you should have never laid down.” Clint is right in that a rifle is certainly a far more effective weapon than a pistol. However, a pistol right now is far more effective than a rifle in five minutes. In an active shooter situation, by the time you retrieve that rifle from the trunk, the entire event will probably be over. Even if it isn’t, that’s five minutes that the nutjob has had to massacre innocent people while you retrieved your favored weapon. Some terrorist attacks follow this pattern as well, but in others (Beslan for instance) the terrorists are intent on drawing things out. In these cases, their first order of business is generally to establish a perimeter to keep hostages or victims from escaping and prevent the authorities from interfering. While you retrieve your rifle, they’ll be settling in to shoot you from ambush.

This vision of the trunk gun may stem from police practice, where a shotgun or, increasingly, an AR style rifle is kept in the patrol car. This overlooks a key difference between the police and the average citizen, however. The police officer is probably arriving at the scene in his patrol car. Retrieving the long gun is a matter of a few extra seconds to grab it before proceeding inside. Citizens do not rush to the scene of these events in our vehicles, we are caught in the middle of them as they happen. If you want to make a difference in an active shooter or terrorist event, it will probably be using the pistol you have on you, or perhaps a rifle picked up from a dead attacker. Retrieving a trunk rifle just isn’t realistic.

If it’s not for vehicle gunfightnig or active shooter incidents, what is the trunk rifle useful for? It’s really quite simple: your trunk gun is your SHTF rifle when it hits the fan while you’re not at home. If natural disaster or civil unrest occurs while you’re across town, or halfway across the country, far from the small (or not so small) arsenal most of us have at home, a rifle in the car provides more options than a pistol.

So what are we looking for in a trunk rifle? Well, you want the trunk gun to have all the attributes of your standard fighting rifle. There’s not much sense keeping two different systems or different setups that you have to learn and train with. Either have a second gun set up the same way, or if you’re on a budget, have one rifle that gets moved back and forth from the trunk to your bedside as appropriate (just make sure you always move it when you leave home or get home).

Depending on exactly what sort of situation you’re facing you may have to leave your vehicle and move on foot. At the very least, you’ll probably want to move the rifle from the trunk up into the passenger compartment (to grab if you need to leave the car, rather than gunfighting from within the vehicle). Doing either of these things with a highly visible rifle may attract some unwanted attention. We should all be mindful of police confiscating guns after Hurricane Katrina. Some sort of discreet carry method is desirable. Either get a rifle case that doesn’t look like a rifle case, or improvise with something like a tennis racket case or camp chair bag.

Since we’re planning for a SHTF situation, plenty of ammo is a must. Three or four additional magazines, plus the one in the rifle, is a good number. As with the rifle, walking around in a situation like this in a chest rig or H-harness isn’t exactly subtle. A discreet shoulder bag, like the TIB or Sneakybag is much more appropriate. 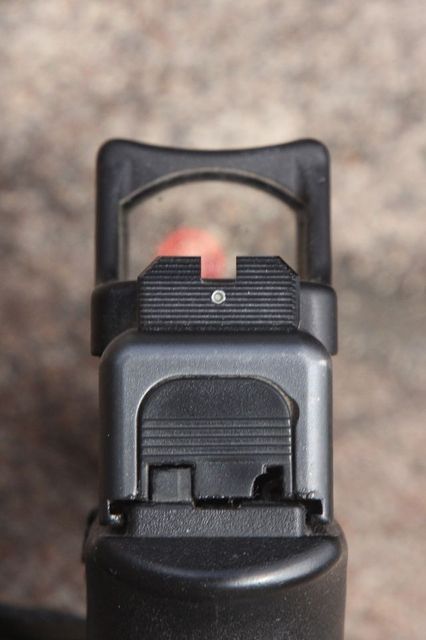 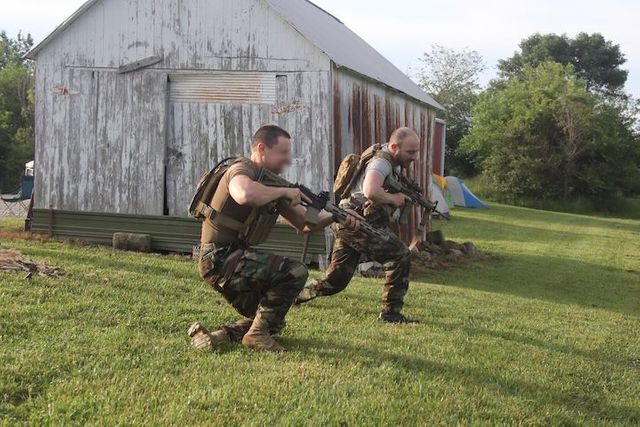